It belongs to the family of weasels and is a close relative of the japanese weasel. 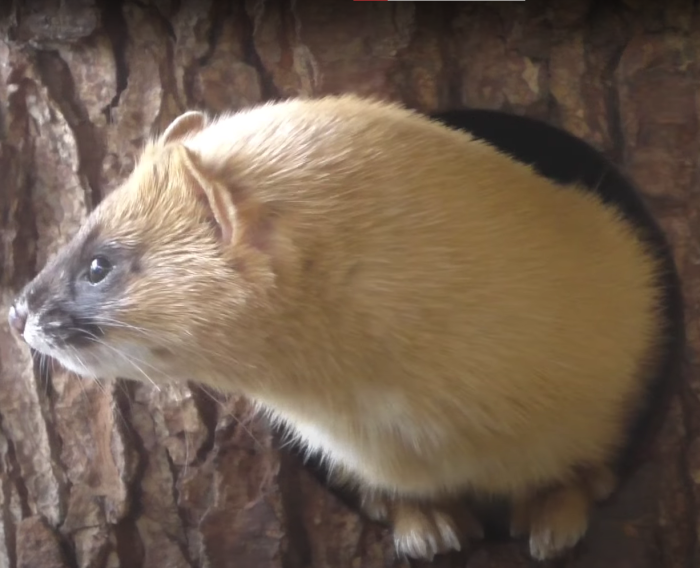 The Siberian weasel has a long, elongated body with relatively short legs, but is larger than the solongois, harrier, and lesser weasel. The head is elongated and small, and the ears are thick at the base but short. The tail is half the length of the body. Siberian weasels are much larger than stoats and almost approach the size of ferrets.

Adult males measure between 28 and 39 cm, while females measure between 25 and 30.5 cm. The males’ tails are 15.5-21 cm long, while the females’ are 13.3-16.4 cm. Males weigh between 650 and 820 g and females between 360 and 430 g. Unusually large specimens have been found on a few occasions in the Barabas steppe. The skull is in many respects intermediate in shape between the mink and the mink; it is longer and larger than the mink, but slightly flatter than that of the marten.

Its winter coat is very dense, soft, and fluffy, with covering hairs that can measure up to 3-4 cm. The undercoat is dense and loose. The Siberian weasel is smooth, light or straw red in color, although shades of orange or peach can sometimes be seen on the skin. These tones are especially light on the back, while the flanks and belly are lighter. The face has a dark coffee brown mask. The tail is lighter than the back and thicker than in other members of the genus. The lips and chin are white or pale ochre. The front of the muzzle is darker than the other parts of the head.

What is the habitat of the Siberian weasel (Mustela sibirica)?

Mustela sibirica is found throughout eastern Asia, north of the Sea of Okhotsk and south of Kwangtung in China. In the south, their range extends west to the border between Tibet and the Gobi Desert, and north of the Gobi into European Russia. They have also been introduced to many islands in Japan.

What does a Siberian weasel eat?

Siberian weasels are carnivorous animals that hunt primarily rodents. They eat rats, mice, pica, squirrels, muskrats, red squirrels, and gerbils. They also catch fish, birds, reptiles, and amphibians. Plant foods include pine nuts and some fruits. During the winter, Siberian weasels may feed extensively on the remains of wolves and yellow-throated mink.

How do Siberian weasels breed?

Siberian weasels are polygamous and males may fight for access to females. The breeding season depends on location. In Western Siberia, they breed from early February to late March. In Primorye, from early March to late April. The gestation period lasts 38-41 days and litters consist of 4-10 kittens. They are born blind and have a sparse coat of white wool. The kittens develop light yellow wool in a few days and open their eyes in a month. Mothers nurse their kittens for 2 months and the kittens stop growing and become independent in late August. Young weasels reach reproductive maturity at 2 years of age.

What is the behavior of the Siberian weasel?

Siberian weasels are nocturnal creatures. They are solitary and maintain territories, however, sometimes when food is scarce, they can leave their range and travel up to 5 miles in a single night. Siberian weasels are active hunters, willingly stalking their prey through snow, logs, water, and people’s homes. They usually eat between 100 and 120 g of food per day and hide the excess. These creatures are not picky about their shelters.

They can nest inside fallen logs, empty stumps, bush piles, and exposed tree roots. They also use and enlarge the burrows of other animals. The length of their burrows varies from 0.6 to 4.2 meters, and their depth from 0.2 to 1.3 meters. The nesting chamber, located in the center or at the end of the corridor, is lined with bird feathers and rodent wool. In addition to a permanent burrow, adults have up to five temporary perches that may be several miles away. Siberian weasels are extremely aggressive when caught in the act of threatening, letting out piercing screams and emitting an acrid secretion that would take a month to clear.

What are the predators of the Siberian weasel?

The Siberian weasel, like its counterparts, is capable of resisting invaders larger than itself. The main predators of weasels are probably large birds of prey, such as owls and hawks.

Are Siberian weasels threatened with extinction?

There are no known major threats to the Siberian weasel. However, in some areas, they are heavily hunted for their fur.